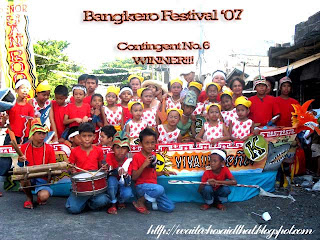 That's what you'd be hearing this whole week as Barangay San Roque, Legazpi City celebrates the Feast of their patron saint San Roque.

Living along side an ocean, the people of Brgy. San Roque commemorates the legend of Bangkero (boat man/people).

In the story, the Roqueñans were living peacefully by the beach with fishing as their source of income and life. Sharks and all sorts of huge scary fishes are not much of their concern because they have become used on encountering such situation, more like happy 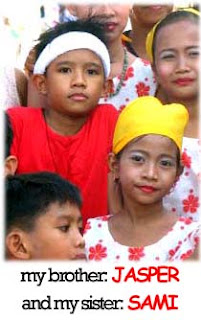 about it too since that would mean something bigger to catch. However one day, a sea monster we Filipinos have come to know as "syokoy" (merman) appeared suddenly in the ocean and threatened the peaceful life the Roqueñans have.

People were screaming, children and women alike running away from the horrible creature. The brave men of San Roque all gathered up and faced the beast while the whole Barangay prayed sincerely for Señor San Roque to bless ang guide them. In the end, the scary sea monster was defeated and the whole barangay rejoiced.

Today, every Purok within our barangay prepares a street presentation and exhibition for a competition. Naturally, the best interpretation of what happened in the legend will win. The theme of this year's celebration focuses on the little kids of Barangay San Roque. Night after night weeks before this feast, my brother Jasper, and sister Sami together with the neighborhood kids practiced their performance. 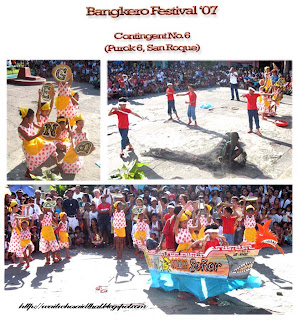 At the day of the presentation, me, as supportive sister and photographer wannabe, I went along with the parade and took photos of the activity. Believe me that was a tiring walk, just imagine how the kids are. They were almost at the verge of having tantrums.

During the program itself I realized that my siblings group probably are the youngest or maybe the smallest participants within it. The rest were more like young people already and not kids. At first I thought it was really unfair. But then again, for the sake of fun, I disregarded the worry. "It's a friendly competition, it shouldn't be a big deal", I told myself.

I was really proud of my brother and sister as they danced along while the crowd went wild with fun and excitement seeing these little kids dancing and screaming rejoices and was filled with fun, fun, and funny scenes. What do you expect with kids? Still, not because I'm their sister, I wasn't that worried after their presentation. Why? 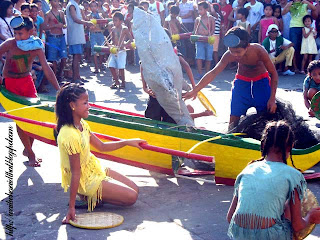 BECAUSE THEY WERE GREAT! So far, their's was the only one that did well focusing on the real story behind the legend. With real pep squad sort of exhibitions. *LOL* And the clothes and props were absolutely well taken care of... now I'm guessing I knew who budgeted for their costumes. But I'm keeping that secret. *ROFL*

Obviously along the pictures that I posted here, you'll see the difference. The other contingent, whom are way older had great moves, props, and a bit of storyline as well... but I'm now more confident for my Purok's team. 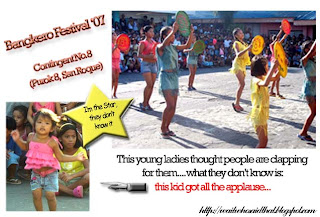 The rest did have well organized synchronization and dances, but we all know there should be more to it than just dance steps. That's what the other contingents lack. And just look at my last photo, with the distraction of the kid dancing at the sides of these pretty young ladies, we all realized that the crowd, and probably the judges as well, would go for the enthusiastic youngsters, than the sexy moves.

Well, what d'you know, sexy doesn't always get it. Take that as a lesson. Nyahahaha!

Still, the activity was a success. When my Purok's team won, the kids (yes, including my brother and sister) run on the stage jumping wildly in unison and rhythm screaming and chanting: "Gana kami! Gana kami!" (We are the winner! We are the winner!). Silly kids. They did this on the way back home too.

Now, if I could only find where the foods are! Isn't this supposed to be a feast?

*excess: after that I went to the opening of an Art Exhibit... but I'll leave that on my next post!*

Posted by andianka/jadiebrat at 5:24 PM

Believe it or not, misanthropic as I am, I love Pinoy fiestas!!! They're probably one of the only rare real deals to happen in this country, if you know what I mean. And OMG, fiesta food are to die for!!!

Anyway, I love the photos! I just hope you took some videos as well! :-)

actually, i took quite a lot of miniclip videos... that's why i only have a few pics to post. i'll try and see if i can post it here.

and true enough, fiestas are one of the few real fun things that happens in our country. thank God they still exist. ;)

Though I prefer to stay at home rather than watch events like that. I know that for people who aren't like me will have fun on that.

I know that 'cause every Nov.24(?), we hold "Angono fiestas." Usually featured in early morning TV shows live such as MUB, but nah. I don't think they do that anymore, no more ABS-CBN nor GMA 7, but photographers(foreign and local) manifest during that day.

Anyway, thanks for asking in my cbox, I'm fine, although I couldn't get enough sleep nor rest.