"Superpoke" Could Make You Lose Your Home

While I was checking my email, I came across this news about a couple who lost their home in connection with being "superpoked" in Facebook. Apparently, an Australian court ruled to allow a mortgage lender to send its demand to the said couple through their Facebook profile. Imagine that! (read news here)

Just what are we going to do when all of a sudden, our electric, water, phone and other bills were posted on our profile's wall??? I'm guessing this is the beginning of so many possibilities regarding the significance of the internet in our lives. I'm seeing a future where everyone stays at home, in front of the computer, all day and all night. Wait... I think that's actually the present already. I guess the future would be us, living in our computers? Whatchathink?

But really... what's your take with the situation where the social networking sites would soon be used by legal practitioners or suits to send us legal documents? Could somebody remind me again the boundaries and rules of these social networking places, and the internet use?

Posted by andianka/jadiebrat at 2:16 PM

What to do when your contents are plagiarized?

Just to update you guys, I'm happy to say that the person who maybe at some point unintentionally plagiarized my contents deleted the copied posts from her blog. The judgment? After much deliberation... alright I'm kidding with the attorney-in-fact/judge tone... let me elaborate what I did so you can try it out when it happens to you too.

First off, after realizing a couple of my entries were copied by someone else and were placed in her blog as if its her own, I...

Yup ladies and gentlemen, when the right way or the good way didn't work, be an annoying delete-what-you-copied-from-me freak and in the end, you'll have your posts all to yourself again. When being annoying still fails:

please do delete the posts you copied from me. My entries means a lot to me. I poured out my emotion on it and it wasn't something I just made up. Everything I write is based on experience and what I felt that time. You can easily come up with one, just please don't take something and pretend its yours. Especially my posts.

Just a TIP: In case you're wondering, and to those who are not aware... as much as possible, do not share or expose the link of a plagiarizers site on your blog post. If it was meant to receive traffic, you would only be helping them get more views and visitors if you direct your readers to their site. Be smart. It would be better if what you'll do is expose the real name of the plagiarizer (only if the person did mean to steal your posts!). In my case, since she had cooperated, I gave her the benefit of a doubt and decided not to highlight who she is nor her blog's link.

Posted by andianka/jadiebrat at 11:17 PM

I don't know what's up with this person... her entries are basically copies of other people's blog posts... how could she be happy with my works? It's very personal... and emo-ish... but all of what I write in here are close to my heart. Better yet, my posts are screams of my personal feeling. I can't stand seeing my own work, no matter how simple it is, used by someone else as if its hers.
just look at this: 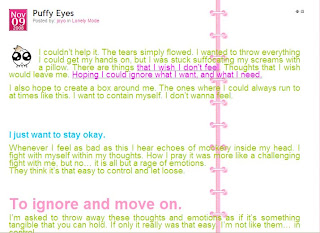 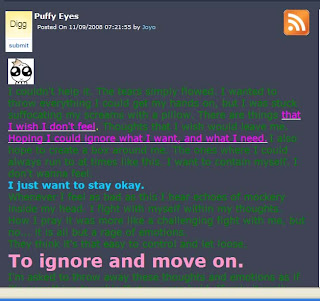 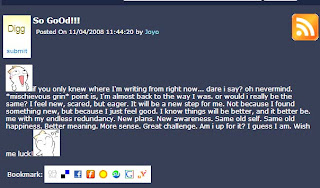 The first one were re-posted on her friendster blog, the other two, and who knows how many more, were posted in a nodesluna.co.cc site... what am I to do??? I'm so pissed.

Posted by andianka/jadiebrat at 8:01 PM